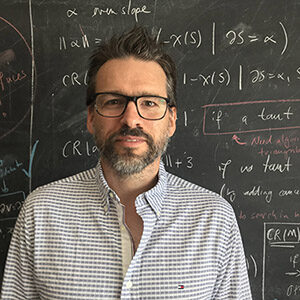 Tell us about your research interests.

My main research areas are geometry and topology. Topology is the mathematical study of the shape of spaces. Geometry gives additional structure to spaces such as distance, angle and curvature. I am particularly interested in the interaction between geometric and topological structures. One of my aims is to develop a geometric imagination in higher dimensions based on my main expertise on the geometry and topology of 3-dimensional spaces.

When did you join the University of Sydney?

I studied mathematics and philosophy in Mainz (Germany) and Melbourne. After graduating with a doctoral thesis in pure mathematics from the University of Melbourne, I spent about three years each in Montréal, Melbourne and Brisbane. I arrived at the University of Sydney, where I currently hold the position of Professor of Geometric Topology, in 2011.

What are you most excited about in anticipation of your new role?

In a relatively short time, SMRI has established itself in the Australian mathematical landscape and shown that it aims to transform research in all of the mathematical sciences across Australia. I am really excited about the ability to contribute towards both the research community as well as reaching out to people involved with mathematics and statistics outside of the university context. This includes students, teachers, education academics, and members of the general public interested in the mathematical sciences.

How does SMRI collaborate with other mathematical organisations in Australia?

I find it important that SMRI is in frequent conversation with AMSI, MATRIX, the Australian Mathematical Society, the Statistical Society of Australia, and also the Australian Mathematics Trust. Whilst there may be some overlap in the activities of these institutions and societies, each plays a distinct role, which helps champion the mathematical sciences in Australia. For example, in my current role as Deputy Director of AMSI I look after national higher education programs that bring together students from all over Australia. AMSI is known as a partner and advocate for the mathematical sciences in the public policy space, and we hope to create further synergy between AMSI and SMRI in the future as the awareness of SMRI increases.

What are your thoughts about the future of research collaboration?

Traditionally, mathematicians have worked alone or established long-term collaborations in pairs. In the last decade, mathematicians have moved towards sharing ideas as they start to develop, and to collaborate in larger teams. We see this in the increase in the number of papers that have multiple authors, and in the number of workshops that emphasise the discussion of—and collaboration on—open problems. The pandemic has helped us develop our skills and maintain some of this over long distances using online platforms, but it has also shown limitations that arise from the difficulty of sustaining long conversations or sessions online. I think in the future we may see a combination of both longer research visits combined with sustained virtual collaboration, especially as virtual reality solutions are improving.

Larissa Fedunik-Hofman
Communications Coordinator at Sydney Mathematical Research Institute
Larissa received a PhD in solar chemistry at the University of Newcastle in 2021. As a science communicator, she is passionate about science and mathematics outreach and supporting the research ecosystem.